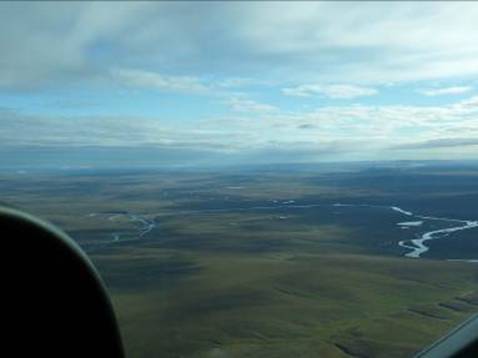 Alaska is the largest state in the United States by area. It is situated in the northwest extremity of the North American continent, with Canada to the east, the Arctic Ocean to the north, and the Pacific Ocean to the west and south, with Russia further west across the Bering Strait. Alaska is the 4th least populous and the least densely populated of the 50 United States.

The name « Alaska »  was already introduced in the Russian colonial period, when it was used only for the peninsula and is derived from the Aleut alaxsxaq, meaning « the mainland » or, more literally, « the object towards which the action of the sea is directed ». It is also known as Alyeska, the « great land », an Aleut word derived from the same root. 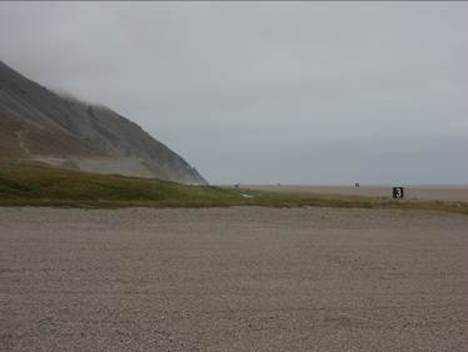 Alaska is the only non-contiguous U.S. state on continental North America; about 500 miles (800 km) of British Columbia (Canada) separates Alaska from Washington state. Alaska is thus an exclave of the United States.

The most populous region os South-central and it contains Anchorage, the Matanuska-Susitna Valley and the Kenai Peninsula. Rural, mostly unpopulated areas south of the Alaska Range and west of the Wrangell Mountains also fall within the definition of Southcentral, as well as the Prince William Sound area and the communities of Cordova and Valdez.

Also referred to as the Panhandle or Inside Passage, this is the region of Alaska closest to the rest of the United States.

The North Slope is mostly tundra peppered with small villages. The area is known for its massive reserves of crude oil, and contains both the National Petroleum Reserve–Alaska and the Prudhoe Bay Oil Field.

Aleutian Islands are part of Alaska and comprise more than 300 small, volcanic islands, which stretches over 1,200 miles. 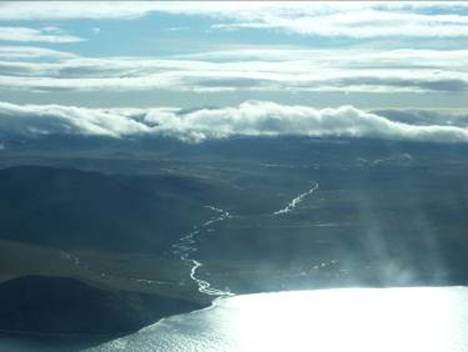 Alaska has nearly 34,000 miles (54,720 km) of tidal shoreline.  Many active volcanoes are found in the Aleutians and in coastal regions. Unimak Island, for example, is home to Mount Shishaldin, it is the most perfect volcanic cone on Earth, even more symmetrical than Japan’s Mount Fuji.

Alaska has more than three million lakes. Alaska has half of the world’s glaciers.

Alaska has more public land owned by the federal government than any other state. Of the remaining land area, the state of Alaska owns 101 million acres. Another 44 million acres (18 million hectares) are owned by 12 regional, and scores of local Native corporations.

Alaska was officially proclaimed a state on January 3, 1959. 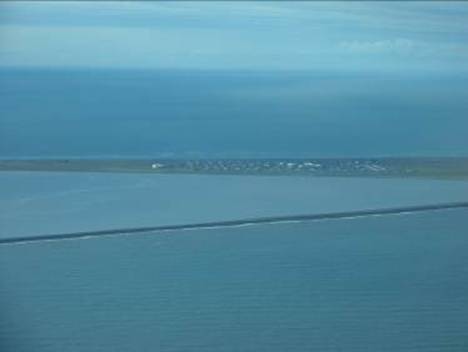 Some of the highest and lowest temperatures in Alaska occur around the area near Fairbanks. The summers may have temperatures reaching into the 90s °F (the low to mid 30s °C), while in the winter, the temperature can fall below −60 °F (−51.1 °C). Precipitation is sparse in the Interior, often less than 10 inches (254 mm) a year, but what precipitation falls in the winter tends to stay the entire winter.

Starting in the 1890s and stretching in some places to the early 1910s, gold rushes in Alaska and the nearby Yukon Territory brought thousands of miners and settlers to Alaska. Alaska was officially incorporated as an organized territory in 1912. Alaska’s capital, which had been in Sitka until the 1900 legislation mandated its transfer to Juneau.

The 1968 discovery of oil at Prudhoe Bay and the 1977 completion of the Trans-Alaska Pipeline led to an oil boom. Royalty revenues from oil have funded large state budgets from 1980 onward. That same year, not coincidentally, Alaska repealed its state income tax. 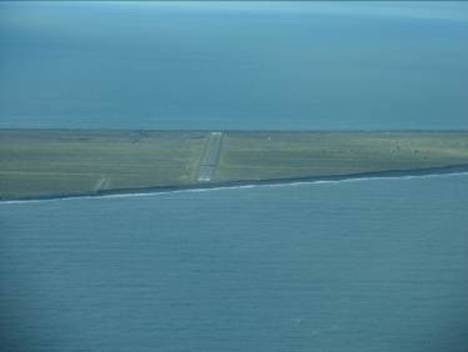 Agricultural production is primarily for consumption within the state and includes nursery stock, dairy products, vegetables, and livestock. Manufacturing is limited, with most foodstuffs and general goods imported from elsewhere.

Employment is primarily in government and industries such as natural resource extraction, shipping, and transportation. Military bases are a significant component of the economy in both Fairbanks and Anchorage. Federal subsidies are also an important part of the economy, allowing the state to keep taxes low. Its industrial outputs are crude petroleum, natural gas, coal, gold, precious metals, zinc and other mining, seafood processing, timber and wood products. There is also a growing service and tourism sector. Tourists have contributed to the economy by supporting local lodging.

Lisa Woodbury is a plane pilot for an Alaskan private airline that carries material, food and persons to the far places of Alaska. After being a bush pilot in Botswana, Namibia and Tanzania, she has chosen to fly planes in Alaska.

She has accepted to share her experiences with the internet family, so that internauts can appreciate the land of Alaska, it’s peoples, it’s scenery, it’s wildlife, it’s changing and capricious weather and it’s quality of life : 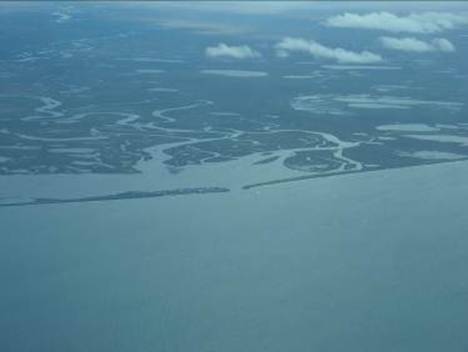 We had a couple of sunny days so I dragged out the camera and took it along for a ride.  The first flight of the day was north to Cape Lisburne.  Cape Lisburne is one of many radar bases up here that still keep an eye on the Ruskies.  It used to be a military base but now it is run by contractors.  The weather can be pretty tough up there and sometimes we can’t get in for several weeks at a time (and as a result, they are always happy to see us and give us real nice pack lunches).  We bring in and out staff and deliver mail and cargo (I brought them 700 pounds of metal blades for a road grader, some engine parts, mail and took out 3 guys).

Looking west down the Cape Lisburne runway.  It ends just where the cliff comes down to the water, you have to watch when the winds are from the south, they come over the hill and make wicked down drafts that can push your plane down into the sea if you depart in this direction.  There was a big bear turd on the runway when I landed but I didn’t see the bear.  This day there was a 1000 foot ceiling with winds right down the runway. 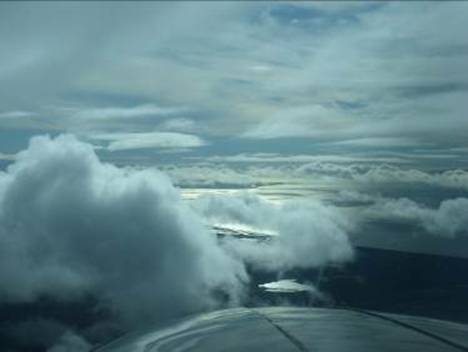 After Lisburne I went 20 minutes west to Point Hope. Point Hope is a whaling community (find it on a map and you will understand this is due to their location).  It also has one of the highest suicide rates in the State.  The weather is generally pretty grim, if there is not a low ceiling, the winds are howling.  When I landed there this afternoon there was a 1800 foot ceiling but he winds were 040 at 28 knots gusting 36 (landing runway 01).  The day these pictures were taken it was clear and calm.

The village is to the left out of the picture of the runway 19 for Point Hope. The mounds to the right of the runway are the ruins of the old village.  The houses were dug half into the tundra.

On the way back to Kotz, down the Chukchi Sea, we pass the village of Kivalina (look carefully on the little spitz of land between the see and the inlet).  They were almost flooded out last month because of the record rains and tides.  They have wanted to relocate the village for some years now but have not found a suitable location.  Interesting runway…. Cemetery is right next to the taxiway (which is the old runway) and the dump is on the short final to 12 (when you fly over the dump and the ravens and gulls scatter, you are at the right altitude, if they don’t fly away you are too high and if you hit one of the birds, you are too low….who needs a VASI?).  The Chukchi Sea is where Shell is trying to put in some new oil wells.  I doesn’t look like they are going to succeed this season. 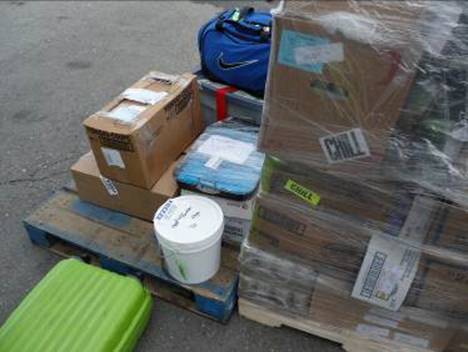 My second flight was the scheduled afternoon flight to Kiana and Noorvik.  We take passengers, priority mail, bypass mail and freight on our scheduled flights. The boxes wrapped in plastic are bypass mail. The white bucket is labeled “meat in blubber” and the blue pan in the middle is a birthday cake baked in Kotz being sent as cargo to the village of Noorvik.  I am proud to say the cake got there in very good condition.  (The last time I had a cake to deliver a chair fell on it).  The cargo guys tried to load this cake in the number 2 pod with the suitcases and blubber.  I rescued it and had one of the passengers babysit it all the way to Noorvik.

The last flight of the day was a school charter.  There was a regional track meet in Kiana and at the end of the day all the children are flown back home.  I flew the Ambler Grizzlies (Ambler is a half an hour farther up the Kobuk River, just past the Kobuk Valley National Park.

The day ended with a cold beer, sitting in the afternoon sun in a t-shirt (it was 8 pm and 55 degrees Fahrenheit).  Of course these beautiful two days couldn’t go unpunished.  Today and the rest of the week…… low ceilings, rain, high winds IFR weather, and a little bit of ice at 4500 feet. It keeps it interesting. 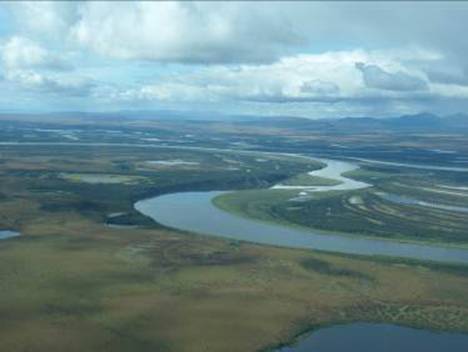 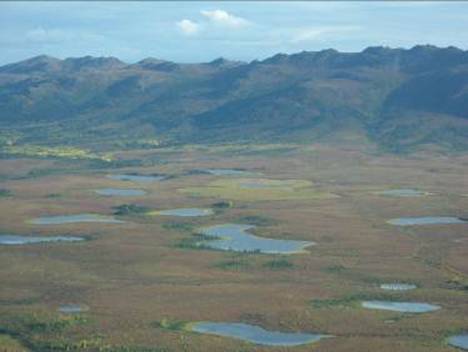 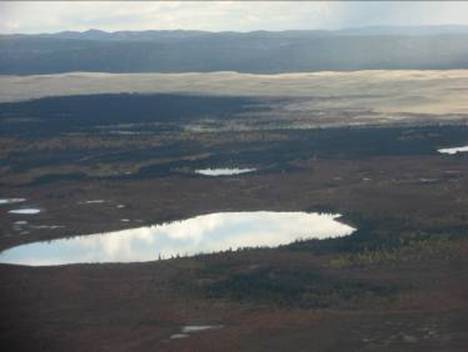 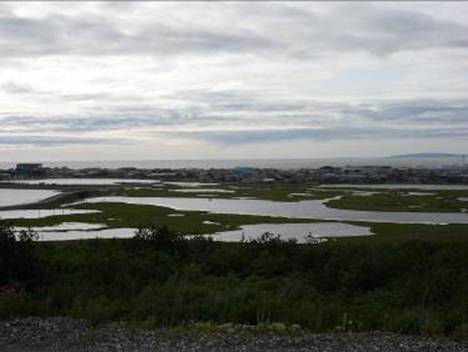 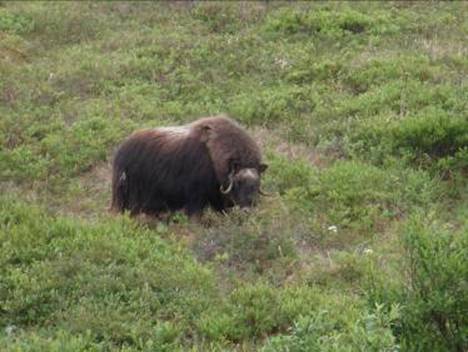 . Flying north to Lisburne, looking east towards the North Slope. This picture was taken on the last day of August and there is fresh snow on the far hills.

. The village of Point Hope

. Beautiful Kotzibue, as seen from Cape Krusenstern.  Kotz is located on the peninsula in the distance under the clouds.

. Flight to Kiana and Noorvik

. Blue pan in the middle is a birthday cake baked in Kotz

. The village of Kiana on the Kobuk River.

. Left, on the way to Noorvik, flying over the Selawik Wildlife Reserve

. Left, the Kobuk Valley National Park in its autumn colors